The Green Archers’ amazing title run in UAAP Season 76 is now a thing of the past. It’s a clean slate once again but this time, the hunter is now the hunted so expect the 7 other teams to put it all in the line to prevent us from doing it again. The skills and pieces are there and it’s all up to our team to prove that last year was no fluke and are determined to extend their reign over the league.

As La Salle’s UAAP title defense officially starts tomorrow, we listed 14 things we would like to see from them this season.

Yes this has been repeatedly clamored for the past so many seasons and until now, the Archers continue to struggle from the foul line. Last season, they were 60.9% from the stripe, only 5th in the league in that category. We long for the day that they would achieve at least a 70% clip collectively.

We can probably call the Green Archers the “Comeback Kings” of the UAAP. They were 5-2 last season in games wherein they were trailing to begin the fourth period. The 9-3 record when they are leading just shows that the team is better off when they don’t start the game listlessly.

We may have seen him shoot a couple of outside shots here and there but most of his points still come from those inside incursions. Coach Juno was quoted in the presson saying that we should expect Jeron to take more threes this season. He actually attempted a lot during the FilOil tournament .

The leadership, stability and toughness that LA Revilla brings will surely be missed this season but we are confident that Thomas, Kib and Terrence have what it takes to fill in the void.

5. A breakout season for Norbert Torres

Nothing would be more satisfying than to see The Bear end his UAAP career with a flourish. He had to hibernate for close to three years before he can play in the UAAP and when he did, he had to go through the process of converting his game from perimeter (He used to play the 2/3 spot back in Canada) to low post. There were offensive struggles but we can’t discount the fact that he did well on the defensive end (2nd in the team in rebounds and block shots). It’s about time The Bear plays bullish.

We have seen this in the past and sometimes those setbacks against lowly teams made a significant dent on the team’s hopes whether it be for a playoff or a higher seed. We saw some games last season where the team struggled to pull away against the cellar dwellers of the league. It’s all about playing with the same high level of intensity regardless of opponent.

7. A Mythical 5 spot for Almond Vosotros

From those floaters off a power dribble to being a crafty three point threat, Almond‘s game has certainly evolved since his rookie year back in 2010. Would anyone doubt that he is perhaps one of the best shooting guards in the league? A spot in the mythical team would be a fitting end to his collegiate career.

8. For Yutien Andrada to have a successful return

Sidelined for the whole of last season due to injury, a bulked-up Yutien returns to the Green Archers for his final year of eligibility. We are ecstatic to see him again on the court patrolling the shaded area.

9. An immediate impact by the rookies

Back in 2003, JV Casio, Ryan Arana and Jerwin Gaco provided valuable contributions in just their first year to a then rebuilding La Salle team. They were perhaps the best group of Green Archer Rooks in recent memory who made an immediate impact. Will this batch be the same or even better?

10. For AVO to be a legit force in the paint

Arnold has taken huge strides every year with the Green Archers. Last year saw AVO jack up his scoring average en route to being named Most Improved Player. His potential remains high and we expect more big things from him for the next two seasons.

11. The Return of the full-court press

The team might want to try it from time to time especially against teams with a shallow and inexperienced backcourt. It was such a joy to see all those interceptions and quick two’s as a result of this stingy defense back in the day.

12. The Continued emergence of Jason Perkins

Jason was the X-factor in last year’s campaign. He is that type of player the Green Archers were longing to have – a consistent low post threat with a nifty touch from the outside. His heft and versatility pose matchup problems for the opposing team. He averaged 12 points and close to 10 boards last season wherein he was part of the mythical selection. He will continue to be a vital cog to the team’s title defense.

The Green Archers last season racked up 377 attempts from beyond the arc (146 more from the previous year) and making 100 (2nd in the league behind FEU). Likewise, their perimeter points jumped from 315 to 492 with an average of 26 per outing. We could see the “Allan Caidic effect” working here. Let’s rain ‘em those threes. 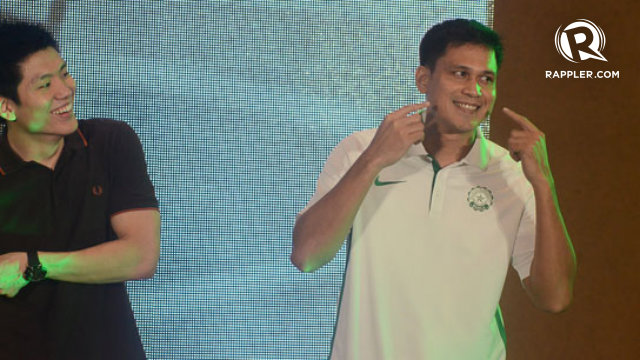 I mean seriously , who wouldn’t?