The Green Mind: A  Chat With Coach Juno Sauler And More! 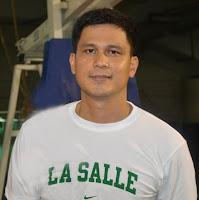 It was a pleasant Saturday morning when I got to the Razon gym. All the players, except LA Revilla, who was attending his graduation ceremonies, were there.

The whole coaching staff was also there and the first one I saw coming out of the elevator was Coach Juno Sauler.I went straight to him and right away as I did not want to miss out on the interview like what happened last week when traffic stranded meon Estrada St..
Very few people really know who Coach Juno Sauler is and so I made it a point to find out more about him? His full name is Marco Januz Sauler.

He is the second of four siblings.His older sister Rhia, (sorry Rhia for giving out that info), is a doctor at La Salle Damariñas. His younger sister Rica is a professor of economics at DLSU and his youngest brother Nino was a former La Salle Zobel player.